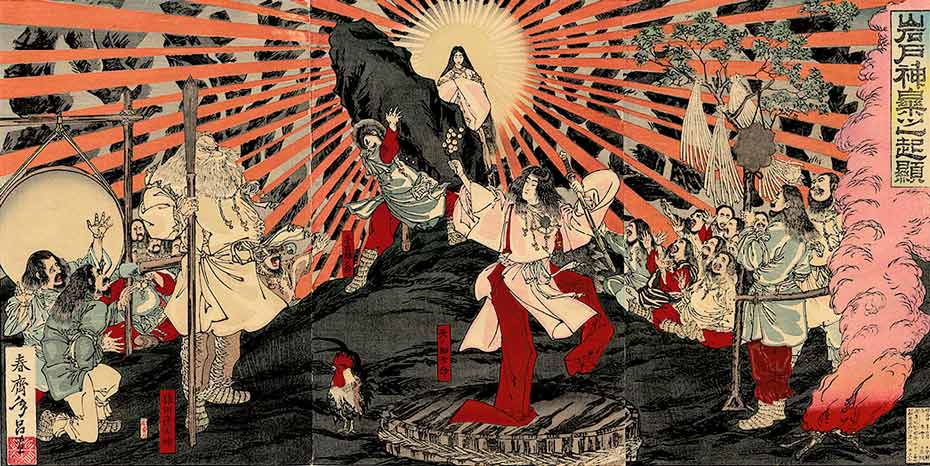 Ama-Terasu, the sun-goddess, was seated in the Blue Plain of Heaven. Her light came as a message of joy to the celestial deities. The orchid and the iris, the cherry and the plum blossom, the rice and the hemp fields answered to her smile. The Inland Sea was veiled in soft, rich colors.

Susa-no-o, the brother of Ama-Terasu, who had resigned his ocean scepter, and now reigned as the moon-god, was jealous of his sister’s glory and world-wide sway. The Heaven Illuminating Spirit had but to whisper and she was heard throughout her kingdom, even in the depths of the clear pool in the heart of the crystal. Her rice-fields, whether situated on hillside, in sheltered valley or by running stream, yielded abundant harvests, and her groves were laden with fruit. But the voice of Susa-no-o was not so clear, his smile was not so radiant. The undulating fields which lay around his palace were now flooded, now parched, and his rice crops were often destroyed. The wrath and jealousy of the moon-god knew no bounds, yet Ama-Terasu was infinitely patient and forgave him all things.

Once, as was her wont, the sun-goddess sat in the central court of her flower home. She plied the shuttle. Celestial weaving maidens surrounded a fountain whose waters were fragrant with the heavenly lotus-bloom; they sang softly of the clouds and the wind, and the light of the sky. Suddenly, the body of a piebald horse fell through the vast dome at their feet; the “Beloved of the gods” had been flayed with a backward flaying by the envious Susa-no-o. Ama-Terasu, trembling at the sight, pricked her finger with the weaving shuttle and, profoundly indignant at the cruelty of her brother, withdrew into a cave, and closed behind her the door of the Heavenly Rich Dwelling.

The universe was plunged in darkness. Joy and goodwill, serenity and peace, hope and love waned with the waning light. Evil Spirits who heretofore had crouched in dim corners came forth and roamed abroad. Then grim laughter and discordant tones struck terror into all hearts.

Then it was that the gods, fearful for their safety and for the life of every beautiful thing, assembled on the bed of the tranquil River of Heaven whose waters had been dried up. One and all knew that Ama-Terasu alone could help them. But how allure the Heaven-Illuminating Spirit to set foot in this world of darkness and strife. Each god was eager to aid and a plan was finally devised to entice her from her hiding place.

Ame-no-ko uprooted the holy sakaki trees which grew on the mountain of Heaven, and planted them around the entrance of the cave. High on the upper branches were hung the precious string of curved jewels which Izanagi had bestowed upon the sun-goddess. From the middle branches drooped a mirror wrought of the rare metals of the celestial mine. Its polished surface was as the dazzling brilliancy of the sun. Other gods wove fine threads of hemp and paper mulberry on an imperial robe of white and blue which was placed as an offering to the goddess, on the lower branches of the Sakaki.

A palace was also built surrounded by a garden in which the blossom-god called forth many delicate plants and flowers.

Now all was ready. Ame-no-ko stepped forward and in a loud voice entreated Ama-Terasu to show herself. His appeal was in vain. The great festival began. Uzume, the goddess of mirth, led the dance and song. Leaves of the spindle tree crowned her head; club moss from the heavenly mount of Kagu formed her sash; her flowing sleeves were bound with the creeper-vine; and in her hand she carried leaves of the wild bamboo and waved a wand of sun-grass hung with tiny melodious bells. Uzume blew on a bamboo flute while eight hundred myriad deities, accompanied her on wooden clappers and instruments formed of bow-strings across which were rapidly drawn stalks of reed and grass. Great fires were lighted around the cave and as these were reflected in the face of the mirror the long singing birds of eternal night began to crow as if day had dawned. The merriment increased. The dance grew wilder and wilder and the gods laughed until the heavens shook as if with thunder.

Ama-Terasu in her quiet retreat heard unmoved the crowing of cocks and the sounds of music and dancing; but when the heavens shook with the laughter of the gods she peeped from her cave and said, “What means this? I thought heaven and earth were dark but now there is light. Uzume dances and all the gods laugh.” Uzume answered, “It is true that I dance and that the gods laugh because in our midst is a goddess whose splendour equals your own!” Ama-Terasu gazed into the mirror and wondered greatly when she saw therein a goddess of exceeding beauty — her own lovely image. She stepped from her cave and forthwith a cord of rice-straw was drawn across the entrance. Darkness fled from the land and there was light. Then the eight hundred myriad deities cried, “O, may the sun-goddess never leave us again.”

From The turquoise story book; stories and legends of summer and nature, by Ada M. Skinner and Eleanor L. Skinner.New York: Duffield & Company, 1918.