Long ago, as I’ve heard tell, there dwelt at the temple of Morinji, in the Province of Kotsuke, a holy priest.

Now there were three things about this reverend man. First, he was wrapped up in meditations and observances and forms and doctrines. He was a great one for the Sacred Sutras, and knew strange and mystical things. Then he had a fine exquisite taste of his own, and nothing pleased him so much as the ancient tea ceremony of the Cha-no-yu; and for the third thing about him, he knew both sides of a copper coin well enough and loved a bargain.

None so pleased as he when he happened upon an ancient tea-kettle, lying rusty and dirty and half-forgotten in a corner of a poor shop in a back street of his town.

“An ugly bit of old metal,” says the holy man to the shopkeeper; “but it will do well enough to boil my humble drop of water of an evening. I’ll give you three rin for it.” This he did and took the kettle home, rejoicing; for it was of bronze, fine work, the very thing for the Cha-no-yu.

A novice cleaned and scoured the tea-kettle, and it came out as pretty as you please. The priest turned it this way and that, and upside down, looked into it, tapped it with his finger-nail. He smiled. “A bargain,” he cried, “a bargain!” and rubbed his hands. He set the kettle upon a box covered over with a purple cloth, and looked at it so long that first he was fain to rub his eyes many times, and then to close them altogether. His head dropped forward and he slept.

And then, believe me, the wonderful thing happened. The tea-kettle moved, though no hand was near it. A hairy head, with two bright eyes, looked out of the spout. The lid jumped up and down. Four brown and hairy paws appeared, and a fine bushy tail. In a minute the kettle was down from the box and going round and round looking at things. 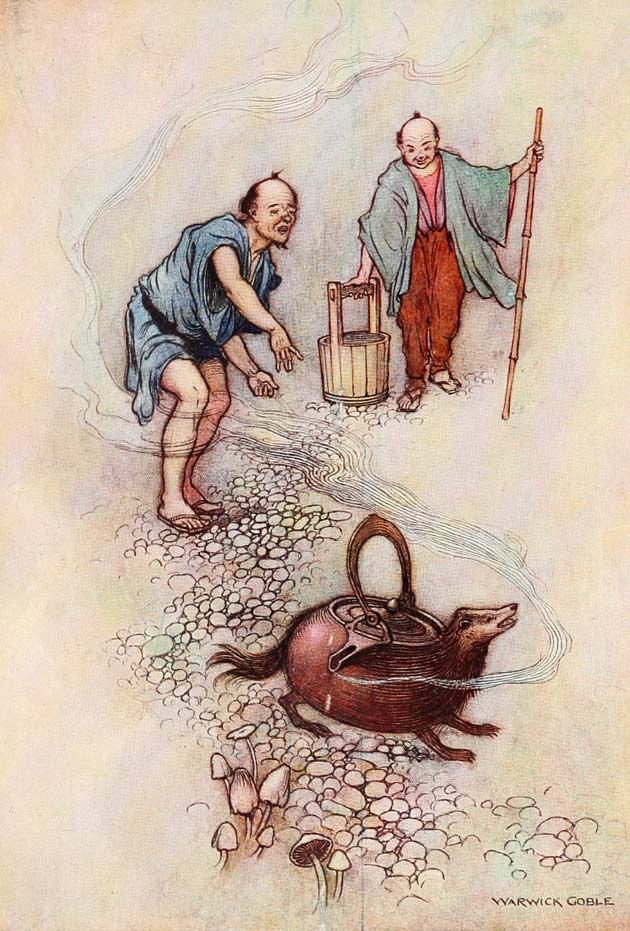 “A very comfortable room, to be sure,” says the tea-kettle.

Pleased enough to find itself so well lodged, it soon began to dance and to caper nimbly and to sing at the top of its voice. Three or four novices were studying in the next room. “The old man is lively,” they said; “only hark to him. What can he be at?” And they laughed in their sleeves.

Heaven’s mercy, the noise that the tea-kettle made! Bang! bang! Thud! thud! thud!

The novices soon stopped laughing. One of them slid aside the kara-kami and peeped through.

“Here’s the master’s old tea-kettle turned into a sort of a badger. The gods protect us from witchcraft, or for certain we shall be lost!”

“And I scoured it not an hour since,” said another novice, and he fell to reciting the Holy Sutras on his knees.

A third laughed. “I’m for a nearer view of the hobgoblin,” he said.

So the lot of them left their books in a twinkling, and gave chase to the tea-kettle to catch it. But could they come up with the tea-kettle? Not a bit of it. It danced and it leapt and it flew up into the air. The novices rushed here and there, slipping upon the mats. They grew hot. They grew breathless.

Presently the priest awoke, all rosy, the holy man.

“And what’s the meaning of this racket,” he says, “disturbing me at my holy meditations and all?”

“Master, master,” cry the novices, panting and mopping their brows, “your tea-kettle is bewitched. It was a badger, no less. And the dance it has been giving us, you’d never believe!”

“Stuff and nonsense,” says the priest; “bewitched? Not a bit of it. There it rests on its box, good quiet thing, just where I put it.”