The princess wept many tears. The prince gave her much good advice, forbade her to leave her lofty enclosure, or to go into company, or to gossip with naughty people, or to listen to idle talk. The princess promised to obey him in all things. The prince went away. The princess locked herself in her room and did not leave it.

After some time a little woman came to her, apparently so simple-hearted, so friendly!

“What!” she exclaimed, “are you lonely? If you would only look out into God’s world, if you would only go down into the garden it would banish all your melancholy, it would cool your head.”

For a long time the princess argued against it. No, she would not do it. But at last she said to herself, “It is no sin to go down into the garden,” and she went.

“Why!” exclaimed the little woman, “the day is so warm, the sun is scorching, but the water is icy cool. See how it dashes! Couldn’t we have a bath here ?”

So she stripped off her dress and jumped into the water. As soon as she had ducked under, the little woman gave her a tap on the back. 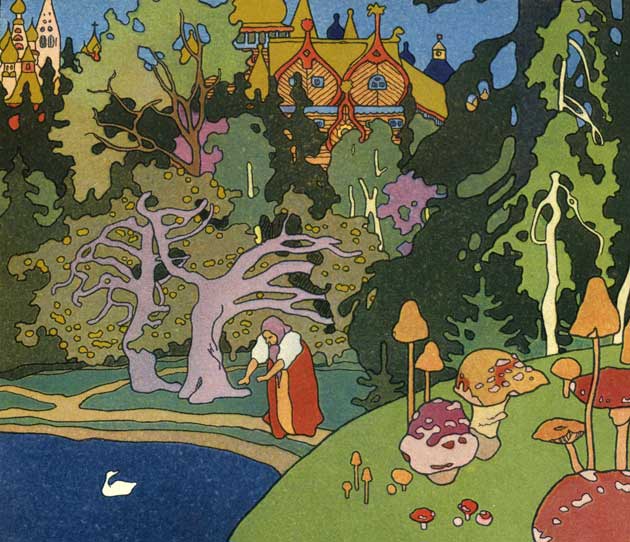 Then the sorceress put on the princess’s clothes and ornaments, painted her cheeks, and sat down to wait for the prince. As soon as the puppy barked and the bell jingled, she ran to meet the prince, threw herself into his arms, kissed him, and caressed him. He was so glad he clasped her in his arms and did not recognise the deception.

But the White Duckling laid some eggs, and hatched two little ones that were beautiful and a third that was ugly, and these little ones became children. She nurtured them and they began to run along by the brook, to catch the gold fish, to collect rags and to fashion coats, to play on the bank, and to look out on the pretty meadow.

“Oh, do not go there, children!” said the mother.

But the children did not heed her. To-day they played on the turf, to-morrow on the green grass. They kept venturing farther and farther, and so they made their way into the prince’s yard. The wicked sorceress instantly recognised them, and she gnashed her teeth. She called the children to her, gave them something to eat and to drink, and put them to bed. Then she ordered a fire to be built, and the kettle to be hung over it, and knives to be sharpened. 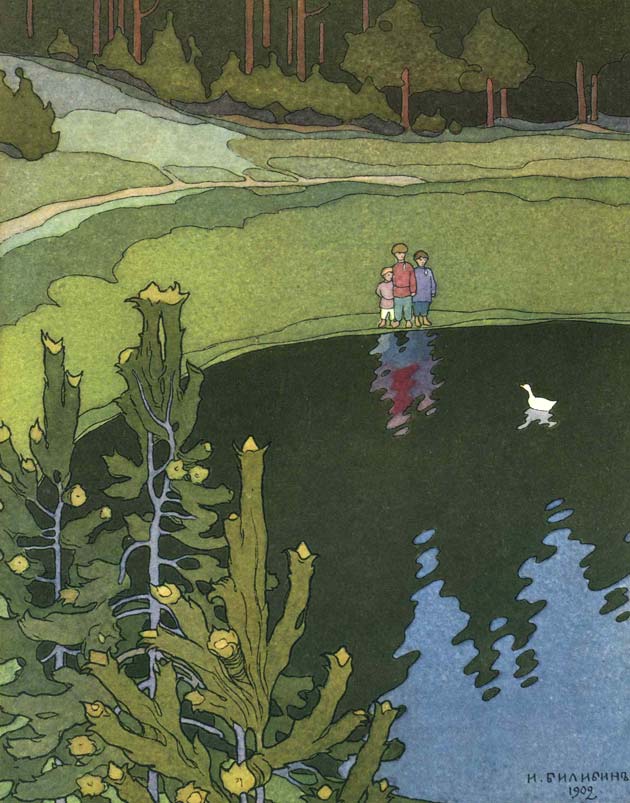 The two pretty brothers lay down and slept, but the mother had told the ugly sister to come and lie against her breast so as not to catch cold. So the ugly one could not sleep, but kept her eyes wide open and her ears wide open.

In the night the wicked sorceress came to the door and asked: “Are you asleep, children, or are you awake?”

The ugly one replied: “Whether we are asleep or not, we have made up our minds that they are going to kill us all. The red-hot fire is built, the bubbling pot is hung, the steely knives are sharpened.”

“They are not asleep,” said the sorceress, and she went away.

After awhile she came back again to the door. “Are you asleep, children, or not?”

The ugly one made the same answer: “Whether we are asleep or not, we have made up our minds that they are going to kill us. The red-hot fire is built, the bubbling pot is hung, the steely knives are sharpened.”

“Why is it always one voice replies?” wondered the sorceress. She opened the door a little way and perceived that the two brothers were sound asleep. Instantly she touched them with her deathly hand and they died.

In the morning the White Duckling called her children; they did not come. Her heart had a presentiment. She shook her wings and flew into the prince’s courtyard. In the courtyard, white as napkins, cold as clods, lay the brothers side by side. She flew down to them, threw herself on them, spread her wings, pressed close to them, and in a mother’s voice cried out:

“Krya! krya! my children sweet!
Krya! krya! my darling dears!
I nurtured you in sorrow deep,
I made you drink my bitter tears,
On darkest nights I did not sleep,
No morsel sweet I took to eat!”

“Wife! Do you hear this marvellous thing?” said the prince to the sorceress. “A duckling is talking!”

“What is wonderful about that?” scoffed the witch. “Order the duckling driven out of the yard.”

They drove her out, but she flew back again to her children:

“Aha!” said the prince to himself, and he cried out: “Bring me the White Duckling!”

All started off, but the White Duckling flew away and would not give herself up to anyone. Then the prince himself went in pursuit of her, and she fluttered down into his hands.

He took her under the wings, and she began to change into different reptiles. The prince was not alarmed; he did not let her out of his hands. After a time she changed into a spindle. The prince broke the spindle in two. One end he threw in front of him, the other end he threw behind him, and he said: “Let a white birch stand behind me, and a beautiful maiden in front of me!”

A white birch grew up behind him and a beautiful maiden stood in front of him, and in the beautiful maiden the prince recognised his young princess. When the princess perceived her children lying side by side, white as napkins, cold as clods, she burst into bitter tears:

When the prince looked at the princess he also wept. He ordered the sorceress to be brought out, and when she came he commanded her to bring the children to life again.

The sorceress was very angry, she gnashed her teeth, but she saw that there was no help for it. So she told them to catch a certain Raven and attach to it two vials, and order the Raven to bring in one the Water of Life and in the other the Water of Speech.

But they fastened the sorceress to a horse’s tail, and she was torn to pieces over the field. Where a leg was torn off there lay a poker, and where an arm was torn off they found a rake, and where her head was torn off, there was a shrub and a stump. And the birds came and pecked it to pieces, and the winds blew the dust away, so that nothing was left of her—not a trace, nor even a memory!