The Widow and her Son

A story of the famine in Shang-Tong Province

This is a folk story of nineteen hundred years ago.

A widow had two sons, Yao-Pao, a lad yet in school, and Yao-Moi who tilled the soil.

Yao-Moi, the elder, was a good man; he had worked hard for thirty years, but he had not gained riches. He sent Yao-Pao to school and served his mother well.

One year there were great rains. The grain all died in the ground and the people of that country had nothing to eat. Yao-Moi had debts which he could not pay, and when his harvest failed he became poorer than ever before. 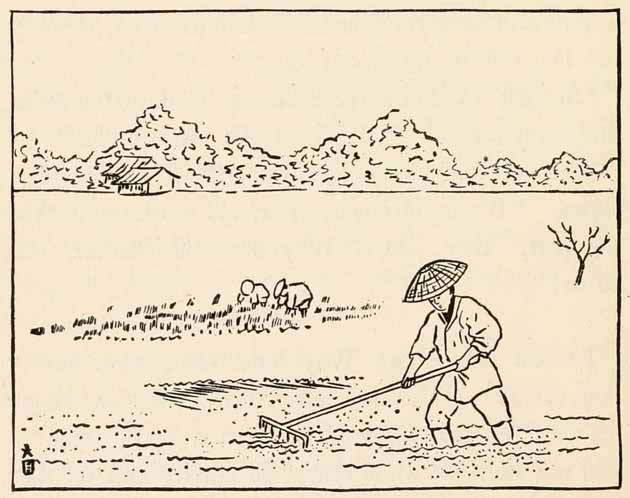 Then there came a great famine and twenty thousand people died in that land. Yao-Moi killed his oxen to keep his mother and brother from starving. Last of all he killed the horses and mules, for it was yet six months before the time of harvest. Each time when he would kill for meat, the neighbors would come and beg food, and because he was sorry for them, he could not refuse.

One widow came many times until she was ashamed to beg longer from the little that he had. Finally she brought a girl child to him and said, “We are again starving. I will give you this girl for some meat. She is strong and can serve your mother.” But Yao-Moi said, ”No, I will give you the meat. I can not take your girl from you.”

So he gave her meat once more, and she took the meat home to her son. But when it was gone and they were weak and fierce again with the death hunger, the widow said, “We shall all die, unless one dies to save the others. My son can not longer walk. I will kill the girl child and save his life. He can then eat.” Her son said, “No, do not kill the girl, trade her to Yao-Moi for meat.” And the mother said, “Yao-Moi will soon starve, too, and then he will kill her. It is better that I do it;” and she took the big sharp knife to make it sharper.

She laid the girl child down on a bench and prepared to kill; but Yao-Moi passed by the house just then, and hearing the moans and screams he stopped to ask the reason. And the widow said, “We are starving. We will have a funeral to-day. We will now kill and eat each other that the last one may live until the time of the harvest.” But Yao-Moi said, “Oh, no, do not kill the girl, I will take her home with me, and you can have meat in exchange for her;” and he took her to his home and gave the widow many pounds of meat for herself and her dying son.

Four months passed by. Yao-Moi had nothing in his own house to eat, and they were all starving—Yao-Moi, his mother, his little brother, and the girl.

When the death hunger came, and the mother saw that her sons must die, she said, “I will kill the girl.” But Yao-Moi said, “No, I think we shall not die. Let us sleep to-night and see. I think something surely will come. Better kill me than the girl child.”

So they went to bed that night. It was winter and the house was cold and dark. There was no wood, no light, no food; and they were starving.

Now, as the house grew more cold and dark, there came to them the quiet of a great despair and they all slept.

And Yao-Moi had a dream, and he saw an old man in flowing white garments, with a belt of gold around his waist. His hair was long and white, and his face was gentle and kind. And he called, “Yao-Moi! Yao-Moi! Yao-Moi! Hearken unto my words. Do you know how many people are dead in this land?”

Yao-Moi answered, “No, but I do know they are many, for only three among a hundred of all that were are now left.”

And the old man said, “In every house but yours some have died, but those of your household are all alive: you have also saved the girl child. I know you are a good man. You have plowed the soil for thirty years, and have never complained about the heaven or the earth. The thunder and waters come, the winds blow and the earth quakes, and still you are patient and kind. You are good to your mother. You support your brother, send him to school, and are as a father to him. You have a kind heart for your neighbors’ troubles. You live a good life and, because of this, you shall not starve. To-morrow morning you must arise early and go to the East Mountain by the wilderness. There you will find many meats and nuts and seeds. Bring them home to your family. I am a spirit sent from the Greatest One to earth.”

After saying these things the man went out and Yao-Moi arose with great joy and told his family. Then he went to the East Mountain by the wilderness, where he found corn and peanuts and the meat of two hundred foxes already prepared to eat.

And he was very glad, and brought home much food and saved many lives.

Ee-Sze (Meaning): If people do good they will have reward.