As a hungry thief of a Wolf was loitering at the end of a lonely road, there passed by a mild-faced, timid-looking Lamb, who was returning to the maternal pen. As the Lamb wore a fine fleecy coat and carried about him many signs of good living, the marauder’s jaws watered at the prospect of a supper.

“What do you mean,” said he, glaring upon the little traveller with his fierce eyes, “by taking up so much of the path where I am walking?”

The Lamb, frightened at the Wolf’s angry tone and terrible aspect, told him that, with all due submission, he could not conceive how his walking on such a wide path could occasion him any inconvenience.

“What!” exclaimed the Wolf, seemingly in great anger and indignation; “you are as impudent as your father, the magistrate’s dog, with the letters on his collar, who seized me by the throat last year, and caused me to be kept in a cage for three months—having all my beautiful hair cut off!” 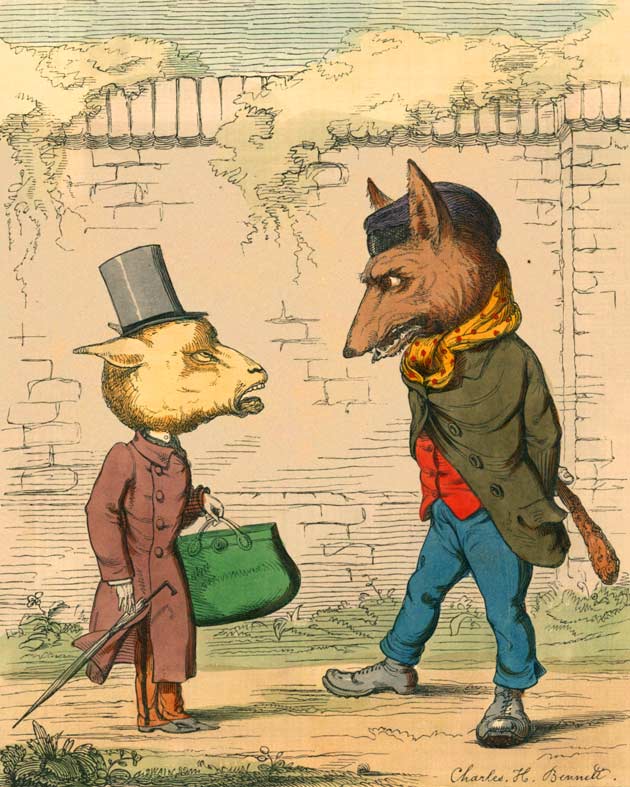 “If you will believe me,” said the innocent Lamb, “my parents are poor simple creatures who live entirely by green stuffs, in Lambeth Walk, hard by; we are none of us hunters of your species.”

“Ah! I see it’s no use talking to you,” said the Wolf, drawing up close to him; “it runs in the blood of your family to hate us Wolves; and therefore, as we have come so conveniently together, I’ll just pay off a few of your forefathers’ scores before we part.”

So saying, he leapt at the throat of the poor Pet Lamb from behind, and garotted him with his own pretty gold-studded collar.

If you have made up your mind to hang your dog, any rope will do for the purpose.