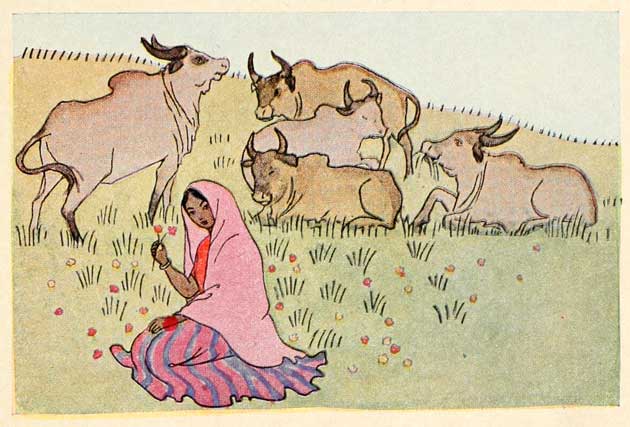 In a city in India lived a little girl who had no name. Her mother died when she was just a baby, before there was time for her to be named, and her father—well, when he wanted to speak to her he just shouted, “You, there,” and she always obeyed him, so that seemed to be name enough.

As she grew older he found plenty for her to do. Early in the morning she had to get up to milk the cow, clean and polish everything in the house, and prepare breakfast for her father. If there were more than he wished to eat, little You There could have what was left. After that she had to take the cows of the village out to pasture and watch to keep them from wandering away. When the sun was straight above her she returned to her home and prepared dinner for her father, then went again to the fields to care for the cows. At sunset the tired girl returned with the cows to finish her work at home. Finally she became so worn out with all this work that she asked her father to bring home a wife to do the work of the house. The father brought home a new wife, just as she asked, but, dear me! what a poor sort of a wife she was! She was big and fat and lazy. She ate enough for three people, and wouldn’t even drive the flies off her own food, much less prepare the meals for other people. So poor little You There had twice as much work to do as before.

It was very hot out in the fields, too, for there were no trees near this village, not even a bush, nothing but the long grass. In fact, the people of that village hardly knew what a tree looked like, for only the men who had traveled far away to other towns had ever seen one. The poor little girl had to stay out in the hot sun all day, watching the cows, with nothing at all to shade her. No wonder that she grew very tired and sometimes fell fast asleep.

One day she fell asleep and dreamed such a pleasant dream. She was sitting in a beautiful garden full of tall, feathery palms and spreading mango trees, and with a lovely fountain splashing its cool waters in the center. But something writhing and squirming in her lap awakened her. It was a huge spotted snake. Ugh! How it wriggled and slipped!

She was just about to scream and run away, when she saw that the snake was in trouble, and she was sorry for even a snake who needed help. So she asked gently, “What do you want, poor snake? Can I help you?”

“Yes,” said the snake, “the hunters are after me and will kill me. Will you let me coil myself about your feet so that your skirt will hide me until they have gone away?”

Now this little girl didn’t like cold, crawling, slimy things coiling about her feet any better than you or I would, but she was very kind-hearted and did not want to see even a horrid spotted snake killed, so she said, “Well, coil around quickly, and please, oh, please lie very still and don’t squirm one bit, and I’ll promise to hide you until they are gone.”

The snake had no sooner hidden than the hunters came. “Have you seen a big spotted snake going this way?” they asked. 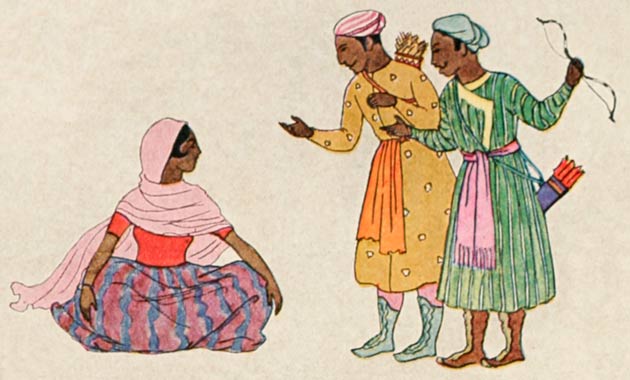 “I was asleep,” said the little girl. “The sun was hot, and I was tired. I just woke up, but I don’t see any snake here now.” So the hunters went on, thinking the snake was ahead of them.