A long time ago a countryman had a son who was as big as a thumb, and did not become any bigger, and during several years did not grow one hair’s breadth. Once when the father was going out to plough, the little one said, “Father, I will go out with thee.” “Thou wouldst go out with me?” said the father. “Stay here, thou wilt be of no use out there, besides thou mightst get lost!” Then Thumbling began to cry, and for the sake of peace his father put him in his pocket, and took him with him.

When he was outside in the field, he took him out again, and set him in a freshly-cut furrow.

While he was there, a great giant came over the hill. “Dost thou see that great monster?” said the father, for he wanted to frighten the little fellow to make him good. “He is coming to fetch thee.” The giant, however, had scarcely taken two steps with his long legs before he was in the furrow. He took up little Thumbling carefully with two fingers, examined him, and without saying one word went away with him. His father stood by, but could not utter a sound for terror, and he thought nothing else but that his child was lost, and that as long as he lived he should never set eyes on him again. 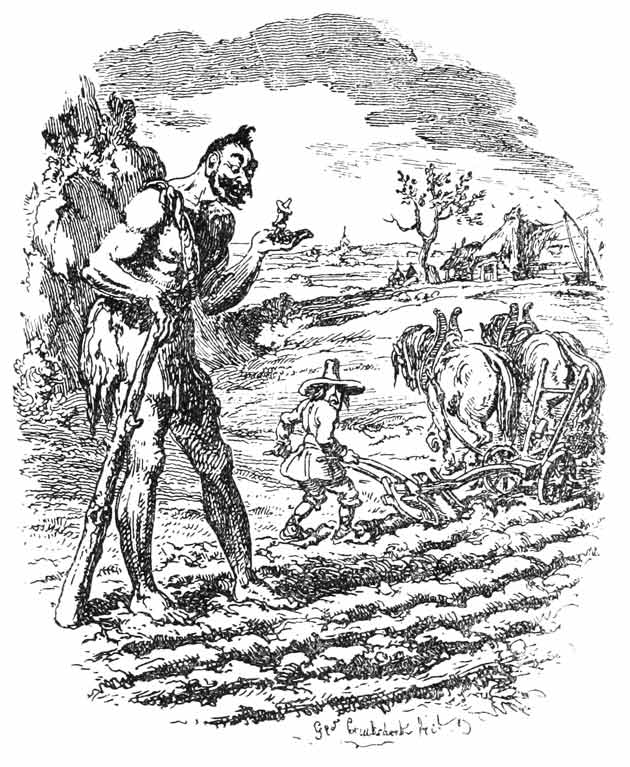 The giant, however, carried him home, suckled him, and Thumbling grew and became tall and strong after the manner of giants. When two years had passed, the old giant took him into the forest, wanted to try him, and said, “Pull up a stick for thyself.” Then the boy was already so strong that he tore up a young tree out of the earth by the roots. But the giant thought, “We must do better than that,” took him back again, and suckled him two years longer.

When he tried him, his strength had increased so much that he could tear an old tree out of the ground. That was still not enough for the giant; he again suckled him for two years, and when he then went with him into the forest and said, “Now, just tear up a proper stick for me,” the boy tore up the strongest oak tree from the earth, so that it split, and that was a mere trifle to him. “Now that will do,” said the giant, “thou art perfect,” and took him back to the field from whence he had brought him. His father was there following the plough. The young giant went up to him, and said, “Does my father see what a fine man his son has grown into?”

The farmer was alarmed, and said, “No, thou art not my son; I don’t want thee—leave me!” “Truly I am your son; allow me to do your work, I can plough as well as you, nay better.” “No, no, thou art not my son, and thou canst not plough—go away!” However, as he was afraid of this great man, he left hold of the plough, stepped back and stood at one side of the piece of land. Then the youth took the plough, and just pressed it with one hand, but his grasp was so strong that the plough went deep into the earth. The farmer could not bear to see that, and called to him, “If thou art determined to plough, thou must not press so hard on it, that makes bad work.” The youth, however, unharnessed the horses, and drew the plough himself, saying, “Just go home, father, and bid my mother make ready a large dish of food, and in the meantime I will go over the field.” Then the farmer went home, and ordered his wife to prepare the food; but the youth ploughed the field, which was two acres large, quite alone, and then he harnessed himself to the harrow, and harrowed the whole of the land, using two harrows at once. When he had done it, he went into the forest, and pulled up two oak trees, laid them across his shoulders, and hung one harrow on them behind and one before, and also one horse behind and one before, and carried all as if it had been a bundle of straw, to his parents’ house.

When he entered the yard, his mother did not recognize him, and asked, “Who is that horrible tall man?” The farmer said, “That is our son.” She said, “No, that cannot be our son, we never had such a tall one, ours was a little thing.” She called to him, “Go away, we do not want thee!” The youth was silent, but led his horses to the stable, gave them oats and hay, and all that they wanted. When he had done this, he went into the parlor, sat down on the bench and said, “Mother, now I should like something to eat, will it soon be ready?” Then she said, “Yes,” and brought in two immense dishes full of food, which would have been enough to satisfy herself and her husband for a week. The youth, however, ate the whole of it himself, and asked if she had nothing more to set before him. “No,” she replied, “that is all we have.” “But that was only a taste, I must have more.”

She did not dare to oppose him, and went and put a huge caldron full of food on the fire, and when it was ready, carried it in. “At length come a few crumbs,” said he, and ate all there was, but it was still not sufficient to appease his hunger. Then said he, “Father, I see well that with thee I shall never have food enough; if thou will get me an iron staff which is strong, and which I cannot break against my knees, I will go out into the world.”

The farmer was glad, put his two horses in his cart, and fetched from the smith a staff so large and thick that the two horses could only just bring it away. The youth laid it across his knees, and snap! he broke it in two in the middle like a beanstick, and threw it away.

The father then harnessed four horses, and brought a bar which was so long and thick, that the four horses could only just drag it. The son snapped this also in twain against his knees, threw it away, and said, “Father, this can be of no use to me, thou must harness more horses, and bring a stronger staff.” So the father harnessed eight horses, and brought one which was so long and thick, that the eight horses could only just carry it. When the son took it in his hand, he broke a bit from the top of it also, and said, “Father, I see that thou wilt not be able to procure me any such staff as I want, I will remain no longer with thee.”

So he went away, and gave out that he was a smith’s apprentice. He arrived at a village, wherein lived a smith who was a greedy fellow, who never did a kindness to any one, but wanted everything for himself. The youth went into the smithy to him, and asked if he needed a journeyman. “Yes,” said the smith, and looked at him, and thought, “That is a strong fellow who will strike out well, and earn his bread.” So he asked, “How much wages dost thou want” “I don’t want any at all,” he replied, “only every fortnight, when the other journeymen are paid, I will give thee two blows, and thou must bear them.” The miser was heartily satisfied, and thought he would thus save much money.

Next morning, the strange journeyman was to begin to work, but when the master brought the glowing bar, and the youth struck his first blow, the iron flew asunder, and the anvil sank so deep into the earth, that there was no bringing it out again. Then the miser grew angry, and said, “Oh, but I can’t make any use of thee, thou strikest far too powerfully; what wilt thou have for the one blow?”

Then said he, “I will only give thee quite a small blow, that’s all.” And he raised his foot, and gave him such a kick that he flew away over four loads of hay. Then he sought out the thickest iron bar in the smithy for himself, took it as a stick in his hand, and went onwards.

Then, all of a sudden, the gates swung back with a terrible clang, and there issued as strange a procession as Tom’s, or indeed mortal’s, eyes ever set on.

The Brown Man of the Moors

His dress was entirely brown, the colour of the brackens, and his head covered with frizzled red hair. His countenance was expressive of the most savage ferocity, and his eyes glared like those of a bull.

The Widow and her Son

It was winter and the house was cold and dark. There was no wood, no light, no food; and they were starving.