Whether she walked a short way or a long way the telling is easy, but the journey was hard. The wood was very dark, and she could not help trembling from fear. Suddenly she heard the sound of a horse’s hoofs and a man on horseback galloped past her. He was dressed all in white, the horse under him was milk-white and the harness was white, and just as he passed her it became twilight.

She went a little further and again she heard the sound of a horse’s hoofs and there came another man on horseback galloping past her. He was dressed all in red, and the horse under him was blood-red and its harness was red, and just as he passed her the sun rose.

That whole day Wassilissa walked, for she had lost her way. She could find no path at all in the dark wood and she had no food to set before the little doll to make it alive.

But at evening she came all at once to the green lawn where the wretched little hut stood on its hens’ legs. The wall around the hut was made of human bones and on its top were skulls. There was a gate in the wall, whose hinges were the bones of human feet and whose locks were jaw-bones set with sharp teeth. The sight filled Wassilissa with horror and she stopped as still as a post buried in the ground.

As she stood there a third man on horseback came galloping up. His face was black, he was dressed all in black, and the horse he rode was coal-black. He galloped up to the gate of the hut and disappeared there as if he had sunk through the ground and at that moment the night came and the forest grew dark.

But it was not dark on the green lawn, for instantly the eyes of all the skulls on the wall were lighted up and shone till the place was as bright as day. When she saw this Wassilissa trembled so with fear that she could not run away.

Then suddenly the wood became full of a terrible noise; the trees began to groan, the branches to creak and the dry leaves to rustle, and the Baba-Yaga came flying from the forest. She was riding in a great iron mortar and driving it with the pestle, and as she came she swept away her trail behind her with a kitchen-broom.

She rode up to the gate and stopping, said:

“Little House, little House,
Stand the way thy mother placed thee,
Turn thy back to the forest and thy face to me!”

And the little hut turned facing her and stood still. Then smelling all around her, she cried: “Foo! Foo! I smell a smell that is Russian. Who is here?”

Wassilissa, in great fright, came nearer to the old woman and bowing very low, said: “It is only Wassilissa, grandmother. My stepmother’s daughters sent me to thee to borrow some fire.”

“Well,” said the old witch, “I know them. But if I give thee the fire thou shalt stay with me some time and do some work to pay for it. If not, thou shalt be eaten for my supper.” Then she turned to the gate and shouted: “Ho! ye, my solid locks, unlock! Thou, my stout gate, open!” Instantly the locks unlocked, the gate opened of itself, and the Baba-Yaga rode in whistling. Wassilissa entered behind her and immediately the gate shut again and the locks snapped tight.

When they had entered the hut the old witch threw herself down on the stove, stretched out her bony legs and said: “Come, fetch and put on the table at once everything that is in the oven. I am hungry.” So Wassilissa ran and lighted a splinter of wood from one of the skulls on the wall and took the food from the oven and set it before her. There was enough cooked meat for three strong men. She brought also from the cellar kwas, honey, beer and wine, and the Baba-Yaga ate and drank the whole, leaving the girl only a little cabbage soup, a crust of bread and a morsel of sucking-pig.

When her hunger was satisfied, the old witch, growing drowsy, lay down on the stove and said: “Listen to me well, and do what I bid thee. To-morrow when I drive away, do thou clean the yard, sweep the floors and cook my supper. Then take a quarter of a measure of wheat from my storehouse and pick out of it all the black grains and the wild peas. Mind thou dost all that I have bade; if not, thou shalt be eaten for my supper.”

Presently the Baba-Yaga turned toward the wall and began to snore and Wassilissa knew that she was fast asleep. Then she went into the corner, took the tiny doll from her pocket, put before it a bit of bread and a little cabbage-soup that she had saved, burst into tears and said: “There, my little doll, take it. Eat a little, drink a little, and listen to my grief. Here I am in the house of the old witch and the gate in the wall is locked and I am afraid. She has given me a difficult task and if I do not do all she has bade, she will eat me to-morrow. Tell me; what shall I do?”

Then the eyes of the little doll began to shine like two candles. It ate a little of the bread and drank a little of the soup and said: “Don’t be afraid, Wassilissa the Beautiful. Be comforted. Say thy prayers, and go to sleep. The morning is wiser than the evening.” So Wassilissa trusted the little doll and was comforted. She said her prayers, lay down on the floor and went fast asleep.

When she woke next morning, very early, it was still dark. She rose and looked out of the window, and she saw that the eyes of the skulls on the wall were growing dim. As she looked, the man dressed all in white, riding the milk-white horse, galloped swiftly around the corner of the hut, leaped the wall and disappeared, and as he went, it became quite light and the eyes of the skulls flickered and went out. The old witch was in the yard; now she began to whistle and the great iron mortar and pestle and the kitchen-broom flew out of the hut to her. As she got into the mortar the man dressed all in red, mounted on the blood-red horse, galloped like the wind around the corner of the hut, leaped the wall and was gone, and at that moment the sun rose. Then the Baba-Yaga shouted: “Ho! ye, my solid locks, unlock! Thou, my stout gate, open!” And the locks unlocked and the gate opened and she rode away in the mortar, driving with the pestle and sweeping away her path behind her with the broom. 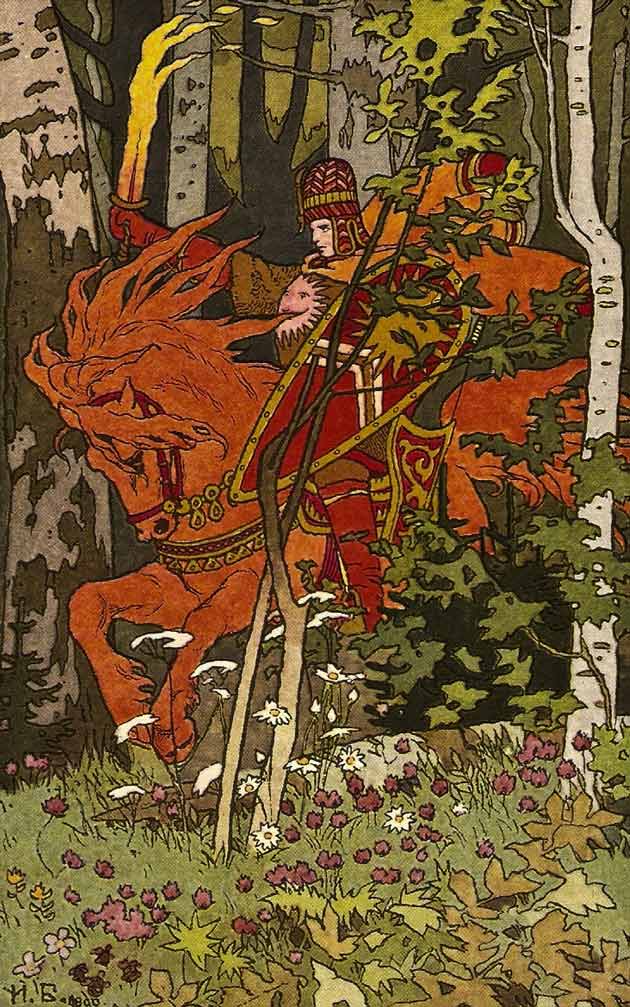 When Wassilissa found herself left alone, she examined the hut, marvelling to find it filled with such an abundance of everything. Then she stood still, remembering all the work that she had been bidden to do and wondering what to begin first. But as she looked she rubbed her eyes, for the yard was already neatly cleaned and the floors were nicely swept, and the little doll was sitting in the storehouse picking the last black grains and wild-peas out of the quarter-measure of wheat.

Wassilissa ran and took the little doll in her arms. “My dearest little doll!” she cried. “Thou hast saved me from my trouble! Now I have only to cook the Baba-Yaga’s supper, since all the rest of the tasks are done!”

“Cook it, with God’s help,” said the doll, “and then rest, and may the cooking of it make you healthy!” And so saying it crept into her pocket and became again only a little wooden doll.

One day, as Margery was coming home from the next village, she met with some wicked, idle boys, who had tied a young raven to a staff. She offered at once to buy the raven for a penny, and this they agreed to.

The magician threw on the fire a powder he had about him, at the same time saying some magical words. The earth trembled and opened in front of them, disclosing a square flat stone with a brass ring in the middle to raise it by.

The wolf thought to himself, ‘That tender young thing would be a delicious morsel, and would taste better than the old one.’