In a small village—do not ask me where; in Russia, anyway—there lived two brothers; one of them was rich, the other poor. The rich brother had good luck in everything he undertook, was always successful, and had profit out of every venture. The poor brother, in spite of all his trouble and all his work, had none whatever.

The rich brother became still richer, moved into a large town, bought a big house, and was a merchant among merchants. The poor brother became very poor, so poor that very often there was no crust even in the “izba,” the peasant’s log cabin, and the children all forlorn, miserable little things cried for food. 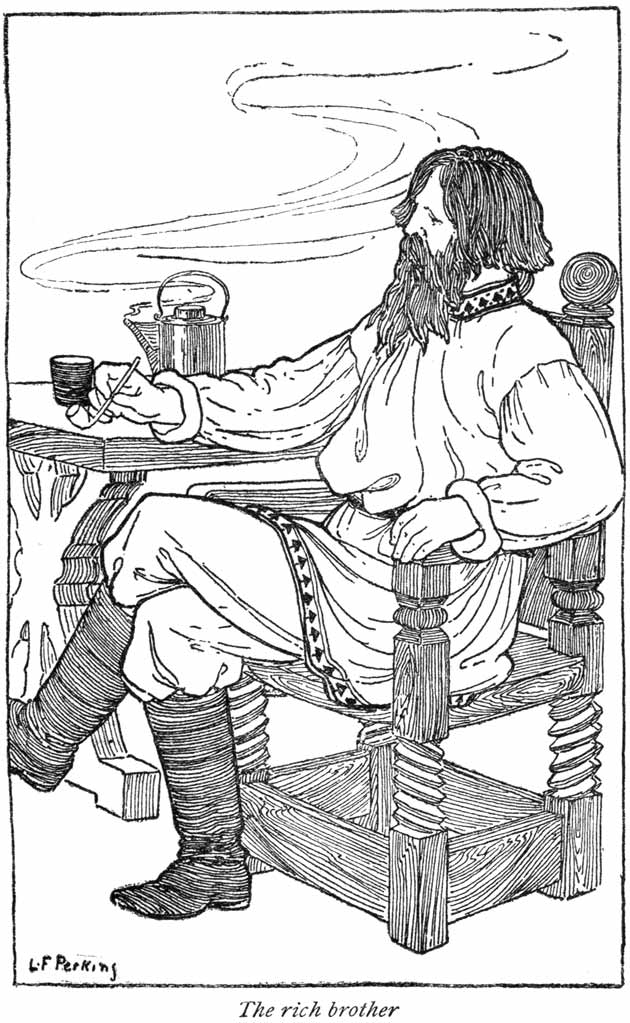 The poor man lost patience and complained bitterly of his ill luck. He had no more courage and his head dropped heavily on his breast. One day he decided to call upon his wealthy brother for aid. He went and said to him:

“Be good, help me, for I am almost without strength.”

“Why not?” answered the rich man. “We can do such things as that. There is wealth enough; but look here, there is also plenty of work to be done. Stay around the house for a while and work for me.”

“All right,” consented the poor fellow, and at once began to work. Now he was cleaning the big yard, now grooming horses, now bringing water from the well or splitting wood. One week passed, two weeks passed. The rich brother gave him twenty and five copecks, which means only thirteen cents. He also gave him a loaf of black rye bread.

“Many thanks,” said the poor brother, humbly, and was ready to leave for his miserable home. Evidently the conscience of the rich brother smote him, so he called his brother back.

“Why so prompt?” he said; “to-morrow is my birthday; stay to the banquet with us.”

The poor fellow remained. But even on such a pleasant occasion the unlucky one had no luck. His rich brother was too busy receiving his numerous friends and admirers, all of whom came to tell him how they loved him and what a good man he was. The rich merchant thanked his guests for their love, and bowing low begged his dear guests to eat, drink, and enjoy themselves. There was no time left for the poor brother, and he was overlooked entirely while he sat timidly in a corner, quite forgotten and unnoticed. He had nothing to eat, nothing to drink. But when the crowd was ready to say good-by, before going away, the bright, light-hearted guests bowed to their host and told him many lovely things, and the poor brother did exactly like them. He bowed even lower than they did and expressed more thanks than they. The guests went home singing in their new “telegi,” the peasants’ carts. The poor brother, hungry and very sad, walked along in silence, and the idea came to his mind:

“What if I also tried to sing a cheerful song? The people would believe that I, too, have had a pleasant time at my brother’s house and that I am going home happy like them.”

The good fellow began his song, began and almost fainted away, for he heard quite distinctly some one behind his back, keeping tune with him in a shrill voice. He stopped. The voice stopped, too. He sang, and the voice continued again.