Mynheer Wybrand Lolkes was a native of Holland, and born at Jelst, in West Friezland, in the year 1730, of parents in but indifferent circumstances, his father being a fisherman, who, beside this most extraordinary little creature, had to support a family of seven other children, all of whom were of ordinary stature, as were both the father and mother.

Wybrand Lolkes, at an early age, exhibited proofs of a taste for mechanism; and when sufficiently grown up, was by the interest of some friends placed with an eminent watch and clock-maker at Amsterdam, to learn that business; he continued to serve this master for four years after the expiration of his apprenticeship, and then removed to Rotterdam, where he carried on this trade on his own account, and where he first became acquainted with, and afterwards married, the person who accompanied him to England.

His trade of a watch-maker however failing, he came to the resolution of exhibiting his person publicly as a show; and by attending the several Dutch fairs obtained a handsome competency. Impelled by curiosity and in hopes of gain, he came to England, and was visited at Harwich (where he first landed), by crowds of people; encouraged by this early success, he proceeded to London, and on applying to the late Mr. Philip Astley, obtained an engagement at a weekly salary of five guineas. 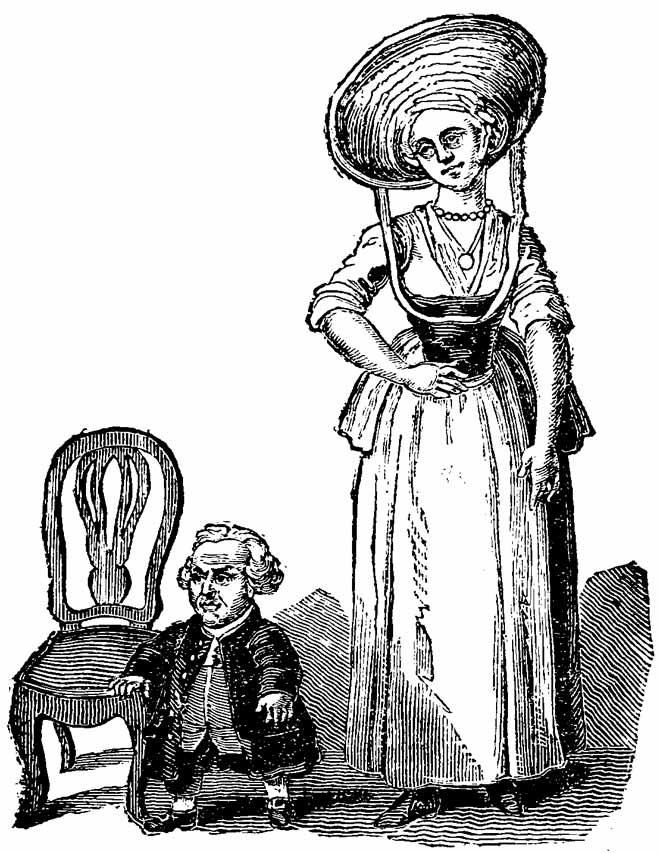 He first appeared at the Amphitheatre, Westminster Road, on Easter Monday, 1790, and continued to exhibit every evening during the whole season. He always was accompanied by his wife, who came on the stage with him hand in hand, but though he elevated his arm, she was compelled to stoop considerably to meet the proffered honour.

Mynheer Lolkes was a fond husband; he well knew the value of his partner, and repaid her care of him, with the most fervent affection; for he was not one of those men, who—
—are April when they woo,
December when they wed.

He had by this wife three children, one of which, a son, lived to the age of twenty-three, and was five feet seven inches in height.

This little man, notwithstanding his clumsy and awkward appearance, was remarkably agile, and possessed uncommon strength: he could with the greatest ease spring from the ground into a chair of ordinary height.

He was rather of a morose temper and extremely vain of himself, and while discoursing in broken English was extremely (as he imagined) dignified. He continued in England but one season, and through the help of a good benefit, returned to his native country, with his pockets better furnished than when he left it.