In a village of Musashi Province, there lived two woodcutters: Mosaku and Minokichi. At the time of which I am speaking, Mosaku was an old man; and Minokichi, his apprentice, was a lad of eighteen years. Every day they went together to a forest situated about five miles from their village. On the way to that forest there is a wide river to cross; and there is a ferry-boat. Several times a bridge was built where the ferry is; but the bridge was each time carried away by a flood. No common bridge can resist the current there when the river rises.

Mosaku and Minokichi were on their way home, one very cold evening, when a great snowstorm overtook them. They reached the ferry; and they found that the boatman had gone away, leaving his boat on the other side of the river. It was no day for swimming; and the woodcutters took shelter in the ferryman’s hut,—thinking themselves lucky to find any shelter at all. There was no brazier in the hut, nor any place in which to make a fire: it was only a two-mat* hut, with a single door, but no window. Mosaku and Minokichi fastened the door, and lay down to rest, with their straw rain-coats over them. At first they did not feel very cold; and they thought that the storm would soon be over.

* That is to say, with a floor-surface of about six feet square.

The old man almost immediately fell asleep; but the boy, Minokichi, lay awake a long time, listening to the awful wind, and the continual slashing of the snow against the door. The river was roaring; and the hut swayed and creaked like a junk at sea. It was a terrible storm; and the air was every moment becoming colder; and Minokichi shivered under his rain-coat. But at last, in spite of the cold, he too fell asleep.

He was awakened by a showering of snow in his face. The door of the hut had been forced open; and, by the snow-light (yuki-akari), he saw a woman in the room,—a woman all in white. She was bending above Mosaku, and blowing her breath upon him;—and her breath was like a bright white smoke. Almost in the same moment she turned to Minokichi, and stooped over him. He tried to cry out, but found that he could not utter any sound. The white woman bent down over him, lower and lower, until her face almost touched him; and he saw that she was very beautiful,—though her eyes made him afraid. For a little time she continued to look at him;—then she smiled, and she whispered: “I intended to treat you like the other man. But I cannot help feeling some pity for you,—because you are so young… You are a pretty boy, Minokichi; and I will not hurt you now. But, if you ever tell anybody—even your own mother—about what you have seen this night, I shall know it; and then I will kill you… Remember what I say!” 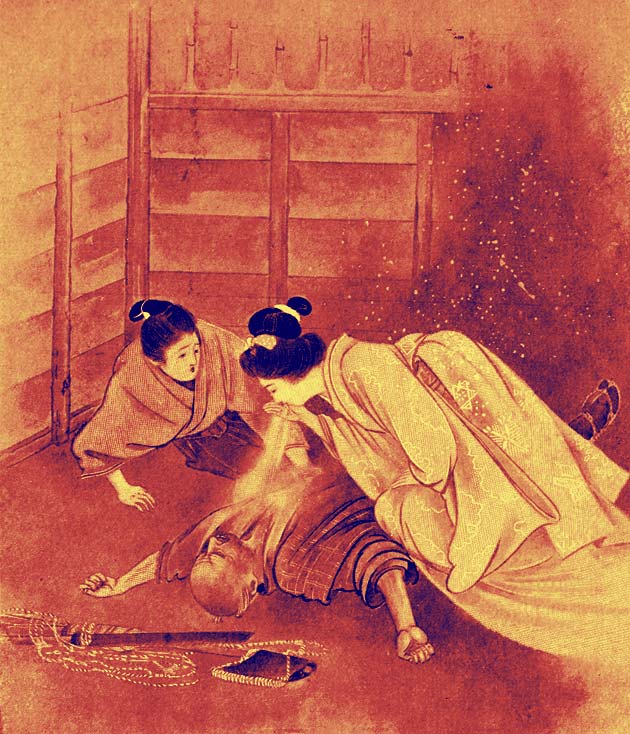 Blowing her breath upon him

With these words, she turned from him, and passed through the doorway. Then he found himself able to move; and he sprang up, and looked out. But the woman was nowhere to be seen; and the snow was driving furiously into the hut. Minokichi closed the door, and secured it by fixing several billets of wood against it. He wondered if the wind had blown it open;—he thought that he might have been only dreaming, and might have mistaken the gleam of the snow-light in the doorway for the figure of a white woman: but he could not be sure. He called to Mosaku, and was frightened because the old man did not answer. He put out his hand in the dark, and touched Mosaku’s face, and found that it was ice! Mosaku was stark and dead…

By dawn the storm was over; and when the ferryman returned to his station, a little after sunrise, he found Minokichi lying senseless beside the frozen body of Mosaku. Minokichi was promptly cared for, and soon came to himself; but he remained a long time ill from the effects of the cold of that terrible night. He had been greatly frightened also by the old man’s death; but he said nothing about the vision of the woman in white. As soon as he got well again, he returned to his calling,—going alone every morning to the forest, and coming back at nightfall with his bundles of wood, which his mother helped him to sell.